Bitcoin “Fees To Block Reward” Metric Has Gone Up Recently

As pointed out by an analyst in a CryptoQuant post, the BTC fees metric may show that the bear market could be advancing to late stage now.

The relevant indicator here is the “fees to block reward,” which measures what percentage of the total block reward is made up by the Bitcoin transaction fees.

When the value of this metric goes up, it means the fee is making up a higher amount of the total miner reward now.

This could suggest that activity is going up in the network. Such a trend typically occurs during bull market periods.

On the other hand, a downtrend of this indicator may imply that the blockchain is turning more inactive right now. Low values of the metric usually appear during bear markets.

Now, here is a chart that shows the trend in the Bitcoin fees to block reward (30-day MA) over the last few years:

In the above graph, the quant has marked the important regions of trend of the Bitcoin fees to block reward metric.

It seems like in the lead up to and during the bull runs, the value of the fees indicator has historically been very high.

On the contrary, the metric has always assumed quite low values during bear market periods. Both these trends are consistent with what is expected.

Over the last few months, the metric flatlined at a low value as the fees remained low due to a lack of activity on the chain.

However, just recently the transaction fees has shot up in value, producing a spike in the fees to block reward indicator.

Such spikes have appeared during bear markets in the past as well, and they have generally signaled the start of a late-stage bear market.

If these previous instances are anything to go by, then the current spike in the metric may also suggest Bitcoin is now entering a late bear period.

At the time of writing, Bitcoin’s price floats around $31.6k, up 3% in the past seven days. The below chart shows the trend in the price of the crypto over the last five days. 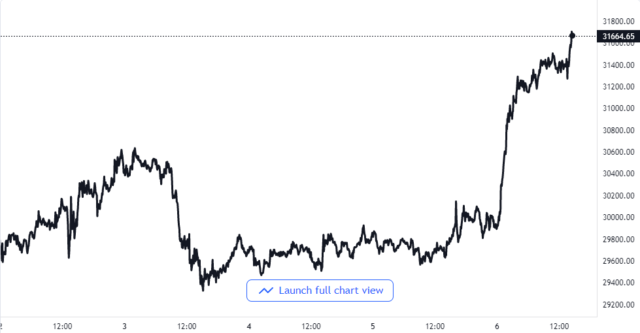