Traders continued to keep the Bitcoin bid higher on Monday as the US lawmakers reached a deal on the second coronavirus stimulus package.

The BTC/USD exchange rate surged to an intraday high of $24,072 in the early morning Asian session. Meanwhile, futures linked to the Bitcoin spot market also climbed to as high as $24,210, pointing to higher purchases of call contracts, further reflecting traders’ extended bullish bias for the flagship cryptocurrency. 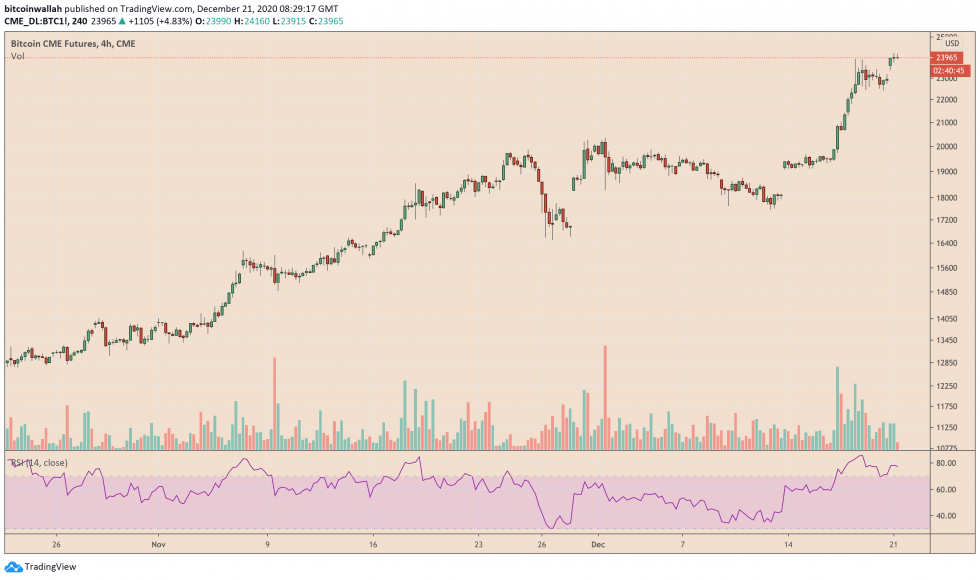 Bitcoin Futures were trading in positive territory on Monday. Source: BTCUSD on TradingView.com

US Congressional leaders finalized a deal on a nearly $900 billion stimulus package that includes relief for small and medium-sized businesses and direct payments for American households suffering economically amid the coronavirus pandemic. The deal will also aid people who have lost their jobs due to lockdown restrictions.

The US dollar gained 0.13 percent against its major peers after crashing to its two-year low last week. Its recent rebound appeared as a form of a short-term technical correction, confirmed by a strong rejection at its intraday high of 90.13 earlier Monday. That further raised Bitcoin’s potential—which typically trades inversely to the dollar—to continue its uptrend.

Another $900 billion in stimulus! Time for #Bitcoin to skyrocket.https://t.co/ohvQ16LXyD

On a four-hour (4H) chart, the Bitcoin price painted what appears to be a half-made Rising Wedge channel.

The bearish reversal pattern emerges as an asset trades inside a set of converging trendlines, forming higher highs and higher lows as it trades north. But as it closes towards the structure’s apex—combined with decreasing volumes—the price ultimately falls by as much as the maximum height between the upper and the lower trendline. 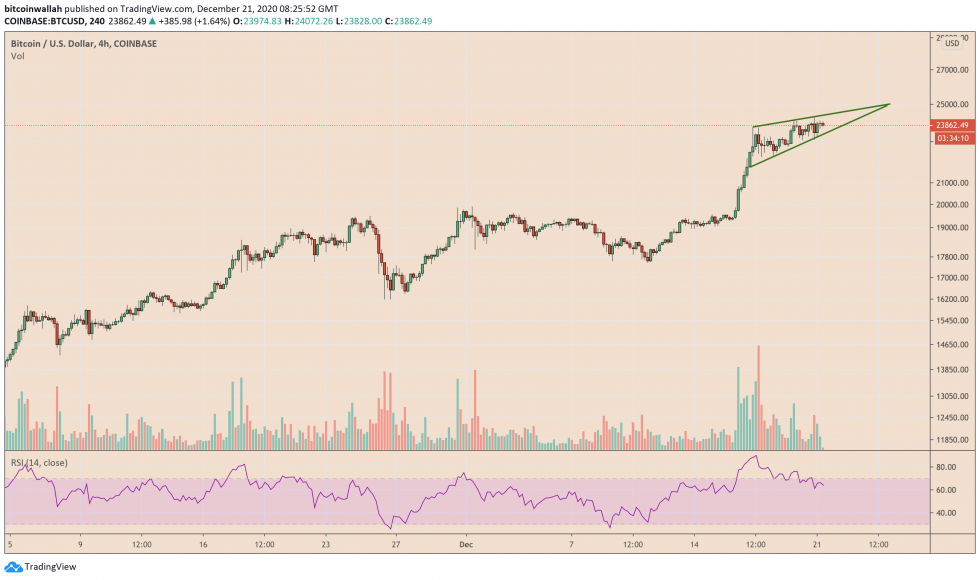 The current Bitcoin outlook partially confirms the Rising Wedge. At best, the cryptocurrency could climb to as far as $25,000 in the coming sessions, only to correct later by more than $1,600. Nonetheless, the current projection would still refrain from dampening Bitcoin’s long-term bullish bias, now dictated by institutional capital.

It is visible in the updates over the last two weeks. Public-traded firm MicroStrategy increased its Bitcoin reserves to $650 million worth. Insurance giant Mass Mutual invested $100 million into the cryptocurrency. Investment firm Ruffer Management bought $745 million of it as well.

That shows that any technical dip that may follow later will likely attract more buyers.

The First Euro Stablecoin Gets a Boost