Data shows the Bitcoin mining hashrate has rebounded 11% since the November end lows; can the metric keep this up and set a new all-time high?

The “mining hashrate” is an indicator that measures the total amount of computing power currently connected to the Bitcoin blockchain. When this metric observes a rise, it means miners are bringing more machines online on the network, showing that they are finding the chain attractive right now. On the other hand, a decrease suggests some miners are leaving the blockchain, likely because they are not finding the coin profitable enough to mine at the moment.

Now, here is a chart that shows the trend in the 7-day average Bitcoin mining hashrate over the last six months:

As the above graph shows, the 7-day average Bitcoin hashrate was at an all-time high of 273 million terahashes per second (TH/s) at the beginning of November, but by the end of the month, the metric had taken a plunge to just 234 million TH/s. In December, however, the indicator has seen a sharp rebound of around 11% as its value has now risen to about 261 million TH/s.

The reason behind these shifts in the hashrate lies in the concept of Bitcoin mining difficulty. A feature of the BTC network is that the rate at which miners produce new blocks (or more simply, handle new transactions) stays mostly constant. Naturally, changes in the hashrate deviate this rate away from the blockchain standard value, since, after a hashrate change, miners possess a different amount of available computing power, and thus mine at a different speed.

To counter such deviations and bring the block production rate back to the chain’s desired constant, the Bitcoin network protocol changes its “mining difficulty,” which makes it harder or easier (depending on the hashrate change) for miners to mine BTC. The below chart shows how the difficulty has changed recently.

From the graph, it’s apparent that the difficulty also set an ATH at the same time as the hashrate’s highs. Since mining rewards stay mostly the same, what high difficulty implies for individual miners is that their shares get smaller (as they are being divided among a larger hashrate pool now).

Miners had already been under immense pressure in this bear market so the difficulty explosion was enough to make it unprofitable to mine for some of them. This is why the hashrate plunged after the rise; the miners underwater pulled their machines offline. But since the hashrate suddenly decreased by such a large degree, the network had to respond by tuning down the difficulty as well.

With this lower difficulty, the Bitcoin hashrate has once again started to climb up as miners take advantage of the higher margins. The metric is now approaching close to the ATH. However, it’s uncertain whether the indicator can actually reach another high, as the next difficulty adjustment is estimated to take place in about 3 days, which will most certainly make mining much harder again, thus limiting the hashrate growth in the same way as the last difficulty rise did. 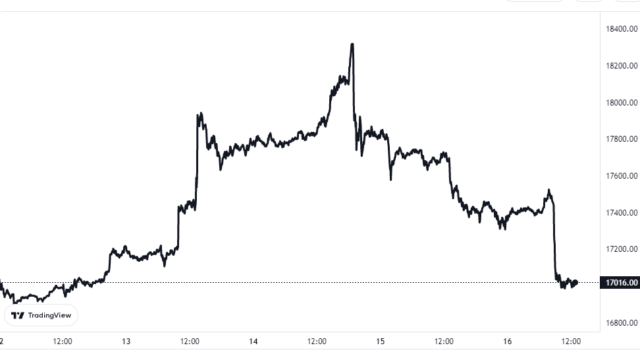