As per the latest weekly report from Glassnode, the BTC accumulation trend score has shown a value of more than 0.9 in the past couple of weeks.

The “accumulation trend score” is an indicator tells us about the big picture aggregate accumulation or distribution trend by Bitcoin investor wallets.

The metric filters out both miners and exchanges, and only keeps track of when whales (and smaller entities in large numbers) add to their wallets.

When the accumulation trend score is close to zero, it means investors are distributing at the moment, or there isn’t simply enough accumulation happening in the market right now.

On the other hand, values of the indicator towards one signify that holders have shown strong accumulation lately.

Scores between the two ends show that there is some accumulation going on, but investors hold a low conviction right now.

Now, here is a chart that shows the trend in the Bitcoin accumulation trend score over the past few years:

As you can see in the above graph, the Bitcoin accumulation trend score had been in the intermittent accumulation zone during the period from January to April.

However, in the last almost two weeks, the indicator’s value has shot up and stayed above a score of 0.9, suggesting that investors have been strongly accumulating recently.

Related Reading | Bitcoin Supply In Profit Drops To 55%, Is The Bottom Here Yet?

Historical occurrences of similar values of the metric have been observed during both bull runs and bearish periods.

In the former instances, as the price rises to a top, the market observes a large influx of relatively new buyers that make up for any distribution from smart money holders.

The latter instances take place after the price has seen a sharp correction, where investors now shift from being uncertain to accumulating as the BTC value per dollar goes up.

There has been one exception to this, however. Back in December 2021, strong accumulation took place during the downtrend, but the price didn’t stop falling and soon investors went back to low conviction.

At the time of writing, Bitcoin’s price floats around $31.6k, up 8% in the past seven days. Over the last month, the crypto has lost 18% in value. 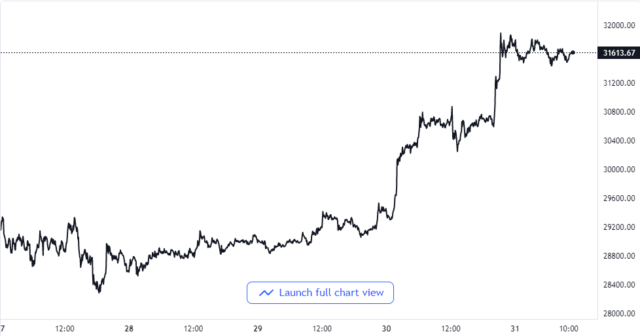