Data shows a Litecoin whale has deposited more than $37.4 million in LTC to the crypto exchange Binance, a sign that may turn out to be bearish for the asset’s price.

As per data from the crypto transaction tracker service Whale Alert, a massive movement of tokens has been recorded on the LTC network in the past day. This individual transaction involved a shift of 1,300,940 LTC across wallets on the chain, worth upwards of $97.4 million at the time the transfer was made.

Such large transactions are usually an indication of activity from either a single whale or an entity consisting of multiple sizable investors. Movements from humongous holders like these can sometimes have noticeable impacts on the price of Litecoin. But which direction such a price change would go in depends on what exactly the whale intended to do with the transfer. Below are some additional details regarding this latest large transaction that may have hints about the purpose behind it.

As the data shows, the sending address in the case of this Litecoin transaction was an unknown address. Generally, addresses like these belong to personal wallets, meaning that they are not affiliated with any known centralized platform. There were two receiving ends of this transaction, one was another unknown address and the other was a wallet attached to the crypto exchange Binance.

The bulk of the coins went to an unknown address, but it’s unclear why the whale made this move. It’s possible that this was just another address owned by the same whale, and thus this shift would only have been done for a change of addresses.

The coin movement of actual relevance here is the 500,000 LTC ($37.4 million) transfer to Binance. Since the tokens here went from a personal wallet to an exchange, this transaction was an exchange inflow. One of the main reasons investors deposit their coins to such platforms is for selling purposes, which means that inflows can have bearish consequences on the price.

Since the inflow, in this case, was from a whale, it could imply that the whale was preparing to sell their Litecoin with this transfer. If that was indeed the intent behind this move, then the value of the crypto may feel a bearish effect from it. 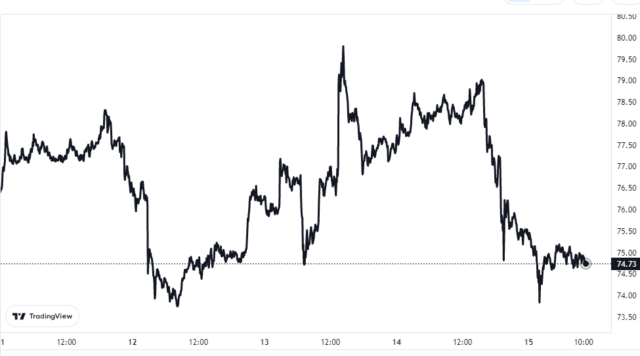 At the time of writing, Litecoin’s price floats around $74.73, down 1% in the last week. Over the past month, the crypto has accumulated 31% in profits.