Mavatrix is a soon-to-be launching GameFi project that enters the market via its NFT drop. Mavatrix is going to be the first project to launch a reward-based NFT collection on Binance Smart Chain.

Mavatrix is set to revolutionize the Gacha industry by launching the first of its kind project on Binance Smart Chain: a “gacha” game on the blockchain. With allowing users to Collect unique avatars, play minigames and battles to generate revenue.

The project is launching on the market starting with its NFT launch, a legendary collection of non-playable characters pegged with rewards that will be sent periodically to the NFT owners forever.

Mavatrix pushes its launch with its collection of reward-based NFTs, the first of this kind on Binance Smart Chain

Mavatrix team intends to launch on the Binance Smart Chain a unique project that combines both Earning and Gaming Mechanisms, starting in fact with their NFT launch. These NFTs will thus be Mavatrix’s legendary non-playable characters who’ll hold a unique feature.

Mavatrix has high expectations and high potential. For this reason, the team wants the minters of the first NFTs release to receive a periodical (daily) share of royalties as a reward from all the transactions of the MAV token via Decentralized Exchanges such as Pancake swap, DeFi in general, or in-game.

Mavatrix’s NFTs launch will additionally be the first example of reward-based NFT launch on the Binance Smart Chain protocol, setting a precedent and model for the other upcoming projects using this blockchain technology started by the giant monster exchange Binance. 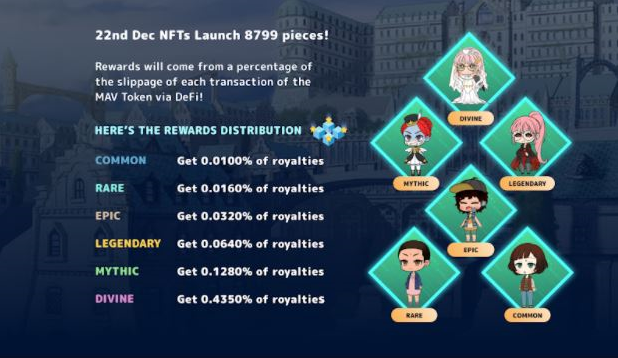 Users will receive rewards will be based on the MAV Token which may also be the base currency of the game. Additionally, should anyone want to sell their NFT, which will be possible too. In this case, though, the owner will lose access to every reward not yet withdrawn that will be collected by the new owner.

After the launch of the collection, in fact, the community will be able to sell their NFTs and Tokens onto secondary marketplaces such as Binance marketplace and their MAV Tokens on DeFi Exchanges such as pancake swap.

So users can get Mavatar through the launch on the 22nd of December.