Whale Inflows Into Bitcoin Exchanges Slow Down; Is a Recovery Ahead?


Whales, a class of investors/traders that hold a large amount of Bitcoin tokens, have lately stopped depositing capital into crypto exchanges.

Data fetched by blockchain analysis firm CryptoQuant shows inflows into the world’s major trading platforms started plummeting at a considerable pace beginning September 16. The trend pointed to a surge in the so-called HODLING sentiment, which means wealthy traders preferred to hold Bitcoin instead of trading them for other assets.

“Fortunately, whale inflows seem to be decreasing,” tweeted Ki-Young Ju, the CEO of CryptoQuant. “It seems the BTC price follows the traditional market lately. I think the only thing we can do with on-chain data at this moment is to watch whale moving. Most of the fundamental on-chain indicators are healthy.“

Observers believe that whales play a significant role in determining Bitcoin’s market trends. The cryptocurrency risks plunging upon noting large capital inflows into exchanges. On the other hand, a drop in deposits removes the psychological selling pressure off Bitcoin.

Mr. Ju predicted the said correlation before the Bitcoin’s drop below $10,300 this Wednesday. On September 21, he envisioned a short-term price correction for the cryptocurrency based on a jump in whale activity. The BTC/USD corrected later, crashing by as much as 7.81 percent from its local top near $10,990.

Other Bitcoin fractals from recent history also show whales-led market trends. On March 8, for instance, CryptoQuant connected the Bitcoin price’s 50 percent decline with the inflow of 6,000 BTC across multiple exchanges.

Today is different. Bitcoin whales are showing signs of accumulation as BTC/USD trades near $10,300. A chart published by on-chain data tracker WhaleMap noted a cluster is forming near the level; it represents an increase in the locations of unspent Bitcoin. Analysts explained: 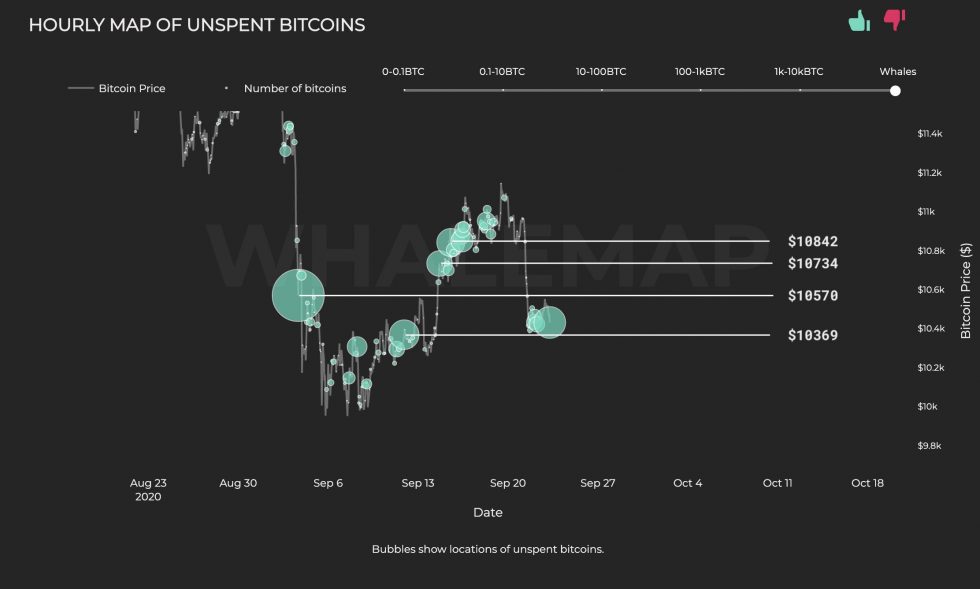 Combining the WhaleMap readings with that of CryptoQuant, it appears Bitcoin may recover part of its recent losses in the coming sessions.

Short-term sentiments–even the bullish ones–can flip without breaking a sweat as long as Bitcoin trades under the influence of macroeconomic fundamentals. As Mr. Ju pointed out, the cryptocurrency is closely following the day-to-day trends in the traditional markets that may strengthen whales’ bearish bias.

One of the main reasons behind a potential Bitcoin downside is a stronger US dollar. Traders/investors lately raised their bids for the greenback as the US Congress failed to finalize the second coronavirus relief bill. That left risk-on assets, including US equities and gold, under bearish stress. 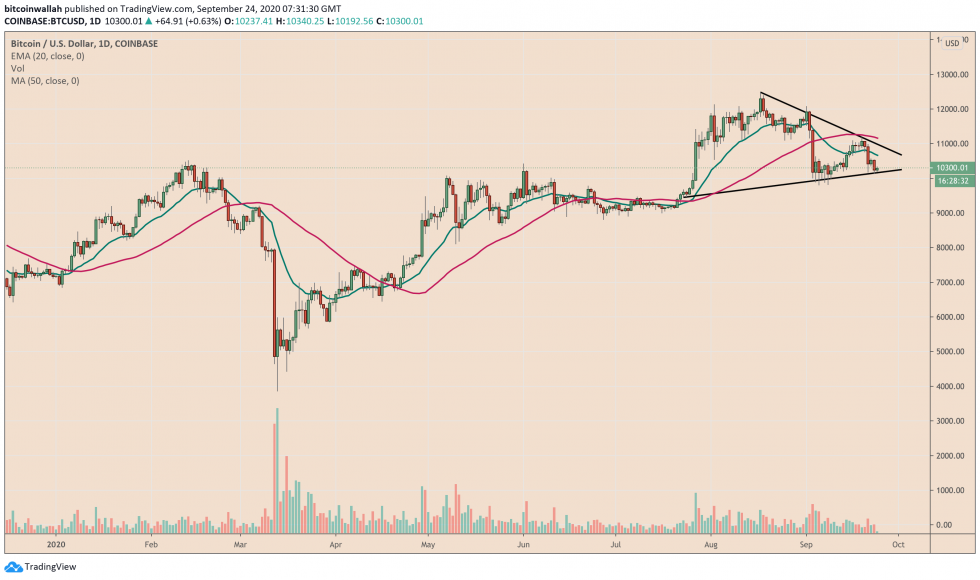 BTCUSD is growing weaker in the wake of the US dollar’s rebound. Source: TradingView.com

Economists believe that the financial aid from the US government won’t arrive until November’s presidential election. That expects to give the US dollar more room to rebound while improving Bitcoin’s short-term bearish bias further.